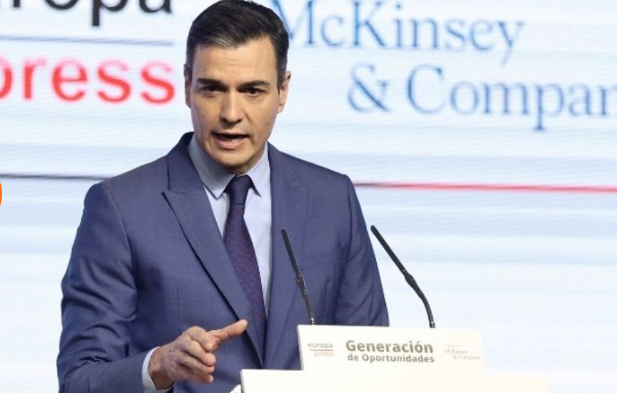 The Government has proposed a plan for the next three months with which it seeks to reduce the effects of the war in Ukraine on Spain’s economy and on the well-being of citizens, in the midst of rising inflation. Among the measures, the Executive will discount gasoline with 20 cents per liter not only to carriers but also to individuals, it will “avoid” layoffs or limit rent increases.

The President of the Government, Pedro Sánchez, advanced this Monday at the Europa Press and McKinsey & Company ‘Generation of Opportunities’ forum the measures that the shock plan will have in response to the economic and social impact of the war in Ukraine, which he will approve tomorrow the Council of Ministers.

The Government “knows” the problems of the affected sectors and will fairly distribute the “sacrifices” required by a war that comes “in full economic recovery”, Sánchez said during the speech in which he outlined the five-year plan axes, which includes measures for families and workers, for the business and economic fabric, for transport, cybersecurity measures, and energy.

Of the 0.20 euros per litre that will be credited for refuelling, 0.15 euros will be subsidized by the State and the remaining 0.05 by oil companies.

“Layoffs will also be avoided,” Sánchez indicated, to urge companies to resort to internal flexibility measures, such as temporary employment regulation files, “which worked so well during the pandemic.”

Last week it emerged that the Ministry of Labor was considering re-prohibiting objective dismissal, a rule that had already been applied during the pandemic. In statements to journalists, the Second Vice President and Minister of Labor, Yolanda Díaz, confirmed that dismissals for reasons linked to the war in Ukraine will be prohibited: “We do not have to fire anyone,” she said.

In the event of dismissal by companies that have resorted to this mechanism, they will have to repay the public aid received.

The social measures also include a 15% increase in the minimum vital income (IMV) in the next three months and 600,000 more families will be added to the social bonus. The fiscal measures already implemented will also be extended to the light and that reduce VAT to 10%.

In this same axis, but in terms of housing, the Government will cap the review of rents at 2% until June 30.

Companies will be able to access the new ICO lines for 10,000 million. At this point, the Government has included aid for agriculture and livestock (362 million) and for fishing and aquaculture (68 million).

The Government will also increase the volume of resources to compensate tolls by 80% and to reach the maximum in CO2 compensation, Sánchez has advanced.

The plan also includes the extension of the maturity period of the loans guaranteed by the ICO and the grace period for the most affected sectors.

The transport sector will receive an injection of more than 1,000 million euros between the bonus of 20 cents per litre refuelled and 450 million in direct aid “to cover liquidity needs caused by the temporary increase in energy and fuel”.

At this point, Sánchez has advanced the specific aid, which will be 1,250 euros per truck, 900 euros per bus or 300 euros per light vehicle (taxis, ambulances…).