Inflation does not punish equally: why Spain and the Netherlands take the worst part 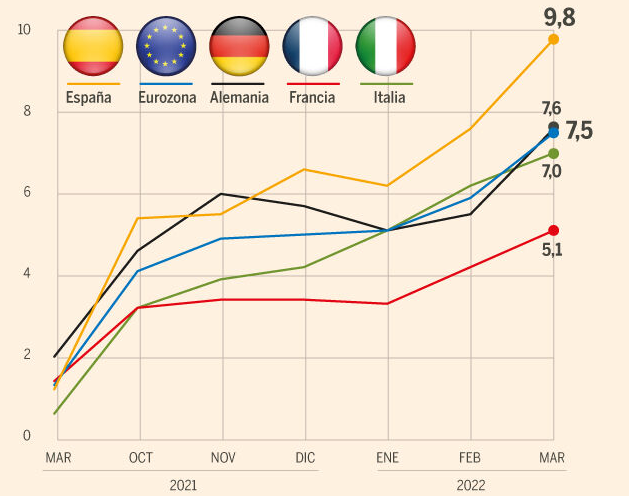 Inflation in the euro zone will continue to hit record highs in the coming months. However, within this general trend there are great differences within the bloc, which shows that the fragmentation goes beyond finances or culture. The differences in the economic and regulatory structure are causing the dispersion of inflation to be at historical maximums since the birth of the euro. Although energy prices are global, their impact is being very different within the large euro countries.

There are currently very large differences in inflation between the countries of the euro area. Among the main economies of the region, dispersion is at historical maximums since the birth of the monetary union (as can be seen in the second chart). French inflation is at the bottom of the range (5.1% y/y), while Spanish and Dutch inflation are at the top (9.8% y/y and 11.7% respectively).

This discrepancy is largely due to inflation in energy prices, which in recent months has had a different impact on countries that, despite using the same currency and being under the umbrella of the same monetary policy, have energy markets with important differences and whose governments have reacted differently to the rise in prices.

JP Morgan analysts have published an article in which they analyse these differences and point out that much of the gap is due to the nature of consumer contracts (fixed versus variable prices) and government intervention. The latest data (CPI for March), reveal that energy inflation was 99% in the Netherlands, 60% in Spain, 53% in Italy, 40% in Germany and 29% in France. In recent months, there has been a large gap between energy price inflation in Italy, the Netherlands and Spain, at the top of the range, and energy price inflation in France, at the bottom of the range.

Drilling down into the data, the dispersion in energy price inflation is tied to gas and electricity prices. With the data published last Thursday by Eurostat, it can be seen that consumer gas prices are higher in Italy than in the rest of the countries. According to JP Morgan experts, these differences are due to the different purchasing strategies of the companies that sell the gas. In some countries, these firms use the futures market to hedge (hedge) against price fluctuations, so that in the short term they may be covered against gas price volatility.

What about the Netherlands

Something similar happens on the electricity side. The Netherlands takes the cake in both gas and electricity with increases of over 150%. In this case, in addition to some contracts linked to the wholesale market, it must also be taken into account that energy production in the Netherlands is very gas-intensive. The country that was once one of the world’s great producers of natural gas is now a net importer of this raw material (wells and deposits have been closed due to the risk involved and their impact on the environment), but the The economy continues to depend heavily on natural gas to produce a unit of GDP. Natural gas has been one of the great triggers of the inflationary phenomenon in Europe, reaching prices never seen before.

The International Energy Agency points out in a report focused on the energy mix of the Netherlands that from 2013 to 2018, national gas production fell by 55%, while dependence on energy imports increased from 29% to 72%. %. Faced with a constant demand for natural gas and a drop in domestic gas production, the Netherlands has become a net importer. Bottom line: The Netherlands is now heavily dependent on Russian gas for continued power generation.

In the case of Spain, the price of electricity has shot up more than 100% year-on-year, while in Italy it has risen by 82%, in France only by 6%, while in Germany 17.6%. The differences between countries are abysmal. Here the differences also lie in the differences between the types of contracts (those linked directly to the wholesale market and those with relatively fixed prices), but it may also have to do with the sample used by the statistical institutes to calculate the CPI.

For example, in the case of Spain, the INE does not include consumers with free market contracts (they enjoy more stable prices), although 60% of households have this type of rate, so the sample remains reduced to consumers with regulated contracts (despite their name, they have contracts that depend on the evolution of wholesale market prices).