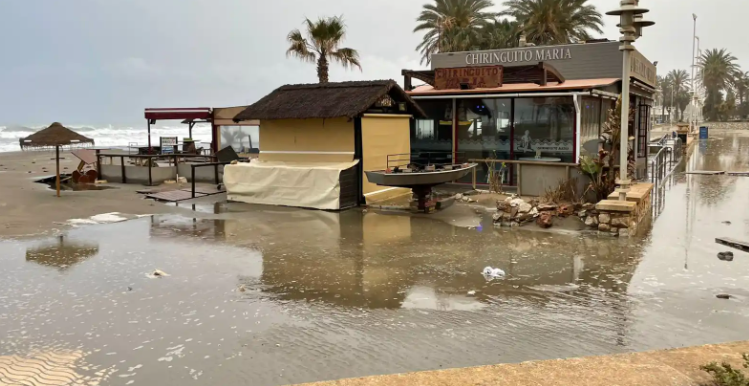 The mayors of Malaga councils were unhappy after the virtual meeting held yesterday with the Secretary of State for the Environment, Hugo Morán and the government’s delegate in Andalucía, Pedro Fernández, because they say the government is not allocating enough money for the emergency works after the recent storms. Following the meeting, Javier Salas, the government’s delegate in Malaga, said “at least 2.1 million euros” will be assigned to the province, but in Marbella alone the estimated cost of repairing the damage is one million euros.

Altogether, the government will be paying six million euros for Malaga, Almeria, Cadiz and Granada provinces.

“What are we supposed to do with 2.1 million euros between us?” asked Teresa Porras, Malaga city’s beach councillor, who has already put a massive clean-up into operation. . She is also calling on Madrid to provide funds to the Coastal Authority so it can carry out the works for which it is responsible. “We are doing the work that they should be doing,” she pointed out. “We are paying out money we can’t afford, to get everything ready for Easter”.

The mayor of Marbella, Ángeles Muñoz, is also disappointed. “I hope they reconsider, because they need to support a sector which has already suffered a great deal and needs to be compensated for its losses,” she said.

Her counterpart in Estepona, José María García Urbano, says it is essential that these emergency works are carried out, but there needs to be a definitive solution to this problem, and the mayor of Rincón de la Victoria and president of the provincial authority, Francisco Salado, complained that the government has said it will spend money on the beaches and provide more resources but nothing about declaring the coast a disaster area or covering other expenses.

The deputy mayor of Vélez-Malaga, Jesús Carlos Pérez Atencia, who is also the beach councillor, didn’t attend the meeting. “I’m tired of hearing nice words and then nothing being done,” he said. An initial estimate of the cost of repairing the 22 kilometres beaches in his municipality is over 200,000 euros. “We’re working to repair the damage; it has been a disaster. I have been asking for the beaches to be protected for the past seven years, but the Coastal Authority has done nothing”.

However, Javier Salas said the amount allocated by the government may be increased. “The figure quoted was in response to initial reports about the cost of repairing the most urgent damage, but more detailed reports are being drawn up and the funding may be modified,” he explained.