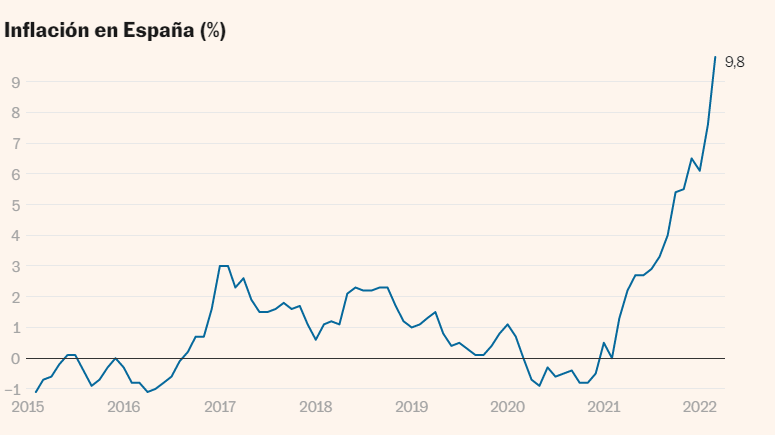 The Consumer Price Index (CPI) increased by 3% in March compared to the previous month and placed the interannual rate at 9.8%, its highest level since May 1985. A brutal escalation that is due to the increase in the cost of all components of the shopping bag, driven by the effects of the war in Ukraine. The interannual CPI thus chains its fifteenth consecutive upward figure, according to preliminary data published this Wednesday by the National Institute of Statistics (INE), which has gone from 1.3% in March 2021 to close to 10%.

According to Statistics, the increase in the interannual CPI for March to 9.8% is due to the generalized increases in most of its components, among which the increases in the prices of electricity, fuels and fuels and food and non-alcoholic beverages, higher this month than in March 2021.

The rise in energy prices due to Putin’s invasion of Ukraine shoots up the rate, which was already out of control at historical levels. But the jump is qualitative compared to February, adding 2.2 percentage points in the year-on-year rate, and the comparison with the same month last year results in a rise of 8.5 points.

The INE includes in the CPI data preview an estimate of core inflation (without unprocessed food or energy products), which increased in March to 3.4%, which is more than six points below the general CPI rate. However, if confirmed, it would be the highest since September 2008.

The final data will be published on April 13. In the advance data published this Wednesday, the prices in the stores are collected until the 21st of each month and the centralized ones, until the 25th.