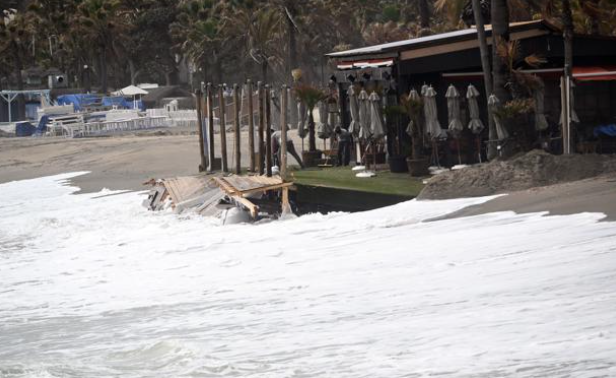 Aemet’s amber alert for heavy rain, which was activated in the Costa del Sol, Serranía de Ronda and Valle del Guadalhorce areas during Wednesday, has been extended to all day this Thursday, 24 March. The forecast is for up to 80mm of rain in 12 hours, mainly in the west, according to the State Meteorological Agency.

Emergency Plan for the Risk of Floods activated

Late on Wednesday, the delegation of the Junta de Andalucía in Malaga activated the first phase of the Emergency Plan for the Risk of Floods in the province, due to the heavy rains that have fallen so far and are expected to continue, after Aemet extended the amber alert due to rain until midnight on Thursday 25. After that it will then subside to a yellow warning until 12noon on Friday.

The rain that fell during the night and early morning of Wednesday in different parts of Malaga province left outstanding figures such as 167.3mm in 12 hours in the Los Reales area, in Estepona, according to data from the by Red Hidrosur network. In Cortes de la Frontera, the Guadiaro river weather monitoring station recorded 100mm in the same period of time; 68.9mm, in Casarabonela; 46.2 and 83mm, respectively, at the Río Grande and Las Golondrinas meteorological stations, in Tolox; 76.5mm, in Jubrique; 69.4mm, in Pujerra; 44.5mm, in Ardales, among others.

However, the rainfall is again benefiting the reservoirs, mainly those of the Guadalhorce and La Concepción.

The intense rainfall also affected different rivers and streams in Estepona, where the Municipal Emergency Plan has been activated due to wind and heavy rains. The floods have forced the closing of two crossings of the Guadalobon river, two of the Monterroso and Padrón rivers; and one of the La Cala and Guadalmansa rivers, and the El Infierno (Casares road in Los Pedregales) and Abejeras streams. According to SUR sources, the rivers Castor, Arroyo Vaquero, El Velerín, as well as Cala Alta and Padrón Alto are also being reviewed.

In Marbella, the Councillor for Security, José Eduardo Díaz, reported that Wednesday night was intense for the municipal emergency services, although there have been no relevant incidents, mainly firefighters attending to branches that fell on the roads. A road access to the Istán road had to be cut and some passages under the A-7 in the Las Chapas areas have also been closed as a preventive measure. The worst problem in Marbella is the beaches, as the councillor points out, with Casablanca being the most affected.